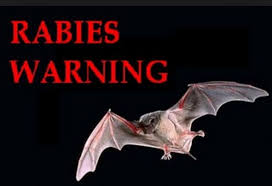 Four children were exposed to the rabies virus after the children handled a bat in Cedar Bluff, Alabama.

The Alabama Department of Public Health issued a reminder earlier this week about the potential dangers of handling bats.  They say that bats, along with raccoons, are the primary reservoirs for rabies in Alabama. Rabies is a viral infection in mammals that is transmitted by bites, scratches or other contact with infected saliva.

Cherokee County Animal Control Officer Dustin Dutton says that people should never handle any type of wildlife.  If you see lethargic or animals acting strangely, you should contact authorities.

Anyone exposed to a bat should consult with a medical provider immediately. Bats are considered to have a higher risk for rabies transmission to humans than other wildlife because of a unique feature not found in most other common rabies carriers.  Bats have very small teeth that can puncture the skin. Their bites are often somewhat painless and may not leave characteristic bite wounds.