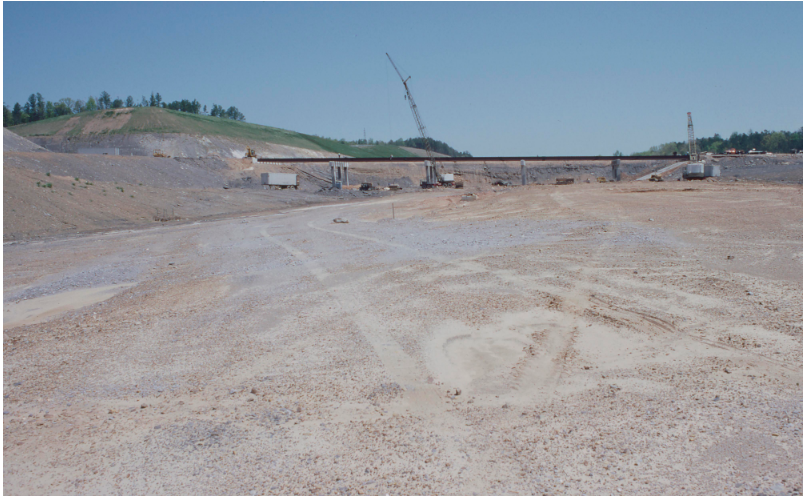 The Georgia Department of Transportation (Georgia DOT) is celebrating the 50th anniversary of Interstate 285 (I-285) by reflecting on its past growth and mapping its future.
Officially opened October 15, 1969, the 64-mile loop encircling Atlanta connects to three other major interstate highways: I-20, I-75, and I-85, along with State Route (SR) 400. Originally, I-285 was just two lanes in each direction and traversed largely undeveloped sections of metro Atlanta. In 1969, the entire population of metro Atlanta numbered fewer than two million; today, more than two million vehicles travel I-285 daily and the population of metro Atlanta has tripled. I-285 is one of the busiest interstates in metro Atlanta and one of the most heavily-traveled roadways in the United States.

The Birth of “The Perimeter”
I-285 quickly became part of the geography and culture of metro Atlanta after its opening. Almost immediately nicknamed “The Perimeter,” this moniker gave rise to a naming convention for businesses and office developments that sprung up around I-285, such as Perimeter Center and Perimeter Mall. The corridor also contributed to the now-ubiquitous acronyms referring to metro-Atlanta geography well known to most residents: OTP (Outside the Perimeter) and ITP (Inside the Perimeter).

Following its initial construction, the corridor was widened several times over the years as the region experienced exponential population growth due to a decades-long influx of new residents and businesses. With each widening of I-285, the corridor continued to see mounting congestion. As the artery boomed with commercial and residential growth, Georgia DOT recognized that more needed to be done for regional mobility. In 2007, the State Transportation Board and the Atlanta Regional Commission (ARC) adopted tolled managed express lanes as the solution to mitigate congestion and improve mobility in the metro-Atlanta region.

Together with express lanes already in operation, these new projects will form a connected transportation network that provides motorists with congestion relief and more reliable travel times. Other much-needed projects in the MMIP will rebuild interchanges at I-285 and I-20 east and west of Atlanta. The express lanes and interchange projects are all expected to be completed and open to traffic between 2025 and 2032.

Additionally, six smaller mobility improvements along I-285 originally scheduled as part of larger express lanes projects – which among other improvements include bridge replacements, an auxiliary lane extension, and additional collector/distributor lanes – are slated for completion between 2023 and 2026.

“The Atlanta region has grown tremendously over the past 50 years and I-285 has expanded with it,” said Georgia DOT Commissioner Russell R. McMurry. “Looking to the future, the addition of express lanes along the I-285 and SR 400 corridors and both interchange projects at I-285 and I-20 will help solve mobility and congestion issues and be integral to our efforts to build a connected transportation network. We recognize that addressing congestion in the I-285 corridor and elsewhere is critical for quality of life, the ongoing success of metro Atlanta, and to support Georgia’s continued economic growth.”

In the past decade, Georgia DOT has begun or completed several operational improvement projects to enhance traffic flow in specific locations along the corridor. One example, the Transform 285/400 Interchange improvement project currently under construction, adds roadway capacity and improved traffic flow, safety, and access.

A Look Back and A Look Ahead: I-285 Traveling Exhibit
To commemorate the 50th anniversary of I-285, Perimeter Mall will host a temporary traveling exhibit October 13-19, 2019, on the lower level near Dillard’s where guests can view historic photos of I-285, witness the evolution of mobility along the corridor, and interact with a reproduction of I-285 built by LEGOLAND Discovery Center Atlanta.

This event is hosted in conjunction with the Perimeter Community Improvement Districts, the Atlanta History Center, LEGOLAND Discovery Center Atlanta, and HNTB. The pop-up exhibit is free to the public and available to guests during normal mall operating hours (Monday-Saturday: 10 a.m.-9 p.m.; Sunday 12 p.m.-7 p.m.). Perimeter Mall is located at 4400 Ashford Dunwoody Road in Dunwoody. Other locations and times for the traveling exhibit will be announced soon.