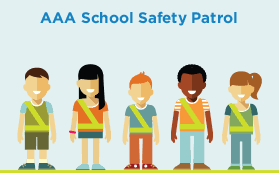 AAA is proud to celebrate its School Safety Patrol program’s centennial anniversary. For 100 years, Patrollers around the world have provided school-aged children an extra sense of safety and security when going to and from school. The program and its more than 440 Lifesaving Award recipients have contributed to the steady decline of U.S. student pedestrian (ages 5–14) deaths—a 24% decrease since 2010.

“AAA’s School Safety Patrol program is the world’s largest school-based safety program. We could not be prouder of the thousands of young men and women annually who dedicate their time before and after school each day to ensure the safety of their classmates,” said AAA President and CEO, and former Patroller, Marshall Doney. “This community program teaches safety and leadership skills to ensure our youngest generations are making smart decisions. I can attest first hand. The important pedestrian and traffic safety measures I learned as a Patroller had a profound and lasting impact on my career.”

Created to make schoolchildren safer while walking to school, the program has grown-up and matured with the times while remaining steadfast to its mission to provide a safer environment and leadership opportunities for millions of schoolchildren. The training that Patrollers receive instills safety sense beyond street crossings, including bus and car drop-offs, monitoring hallway congestion, and teaching Patrollers invaluable leadership skills. The famous Patroller belt has seen change, too, going from white to neon orange to today’s fluorescent green called ‘Lectric Lime.

“Patrollers direct children, not traffic. Their focus is on helping students be safe where traffic is concerned,” said Montrae Waiters, spokeswoman, AAA – The Auto Club Group. “Their actions save lives. Patrollers serve as role models in schools across the country.”

For some students, becoming a Patroller is inspired by wanting to help others and the privilege to wear the ‘Lectric Lime belt and badge proudly. For others, it is also a tradition passed on from generation to generation, like 14-year-old Kayo Cook from Richmond, Virginia, whose uncle, grandfather, and great grandfather all proudly served as Patrollers.

“It taught me how to be a leader,” Cook said. “It’s always good to be able to help others.”

The belt may come off after fifth grade, but the leadership values and safety awareness have inspired many to pursue admirable careers, including the sitting president.

Other notable Patrollers include Jimmy Carter and Bill Clinton, astronauts, governors, members of Congress, Supreme Court justices, Olympic medalists, and authors, like Diary of a Wimpy Kid Jeff Kinney. Many Patrollers now serve as educators, executives, and community leaders. Some, like Karen Guilbeault, enter law enforcement. Guilbeault rose to become the first female captain in the Cranston, R.I., police department and their first to graduate from the FBI’s National Academy in Virginia.

“Being a patroller helped me get involved in community service and gave me a sense of belonging and instilled self-confidence,” said Guilbeault. “It opened so many doors for me and formed my interest in going into law enforcement.”

The 2020–21 school year, different as it may be, boasts 679,000 Patrollers in 35,000 schools in the United States. The legacy doesn’t stop here, however. Over the last 100 years, interest in and excitement for the program have spread around the world. The AAA model has been adopted in at least 30 other countries, including England, France, Germany, the Netherlands, and New Zealand.

To learn how to bring the AAA School Safety Patrol to your school, email AAASchoolSafetyPatrol@acg.aaa.com.