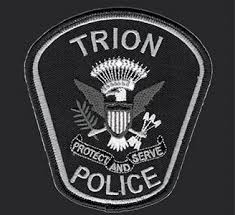 A passenger in a stopped vehicle was arrested this week after she gave the Officers a false date of birth.

On October 12th, while on patrol a Trion Police Officer observed a vehicle traveling down Highway 27 without working taillights. After observing the vehicle switch lanes abruptly and then brake hard to decrease to a speed of 38mph, the officer performed a traffic stop near the Triangle Shopping Center in Trion. The driver was identified as Robert Ramey with a female passenger. While speaking to the driver, the officer noticed a very strong odor of alcohol coming from inside the vehicle. When asked if either the driver or the passenger had been drinking that day, the driver stated that he had not as he was a truck driver, however the female passenger stated that she had been drinking. The officer then asked for both occupants ID’s or license, which the driver was able to provide but the passenger could not. When walking around the back of the vehicle to speak with the passenger, the officer noticed the female placing a white Styrofoam cup behind the drivers seat. The female passenger gave the name of April Wright with a date of birth of 03/08/1979. When running the suspects information through NCIC/GCIC the driver, Robert Ramey came back as valid and clear, while the passenger, Wright did not return in the system at all. At this point the officer asked the female to step out of the vehicle and asked if she had indeed given correct information to which she stated yes, she had. A search of the vehicle for the Styrofoam cup lead to the discovery of alcohol in the cup along with a new glass pipe that is typically used in the smoking of illegal drugs.

When asked about the alcohol the female stated that it was hers and the officer again asked her name and date of birth. At this point the female stated that her real name was April Michelle White with a date of birth of April 5th, 1979. When asked why she had initially given a false name, White stated it was because she was being evicted from her residence. White was placed in handcuffs at this point and transported to the Chattooga County Jail. Whites correct information was then ran and was returned as suspended for a DUI. The driver was released with a warning for the taillights after testing negative for alcohol.