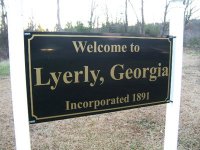 Lyerly voters don’t have to go to the polls during the municipal elections this year.  Chattooga County Registrar Sheena Weaver explains why.

According to Georgia Law, the Town of Lyerly does not have to hold the election because none of the candidates running have any opposition.

Early voting in municipal elections in Summerville, Trion and Menlo started on Tuesday of this week.